UAT in the UK, Part III

In our first installment back in August 2017, we announced the trial we are co-leading with SkyDemon to broadcast weather data over 978MHz in the ADS-B UAT protocol.  In March, we announced two additional installations at Redhill and Goodwood Aerodromes.  This Flight Information Service-Broadcast (FIS-B) system mimics but is not identical to the system deployed in the U.S. by the FAA.  This installment (Part III) gives an update on our progress with the installation of two new locations, and answers some of the more common questions we’ve received.  But first things first.

2 New UAT FIS-B stations have been installed at Wycombe Air Park and Dunsfold Aerodrome as of April 10!

Our first station was installed at the SkyDemon offices in Milborne Port back in November.  We learned a bit from that first installation in terms of installation and design, and took advantage of the slower flying season over the winter to refine the design to make a few improvements.  We’ve come back with two new installations at Redhill and Goodwood, with several more planned.  The rest of this post will take the form of a Frequently Asked Questions (FAQ).

1. Where are ground stations currently installed?

We now have 5 operational systems:

2. What is being broadcast?

The products that are being broadcast are a weather radar mosaic, METARs, and TAFs.  Each station broadcasts a circle of radar coverage of around 200NM, and METAR and TAF from stations within 250NM. 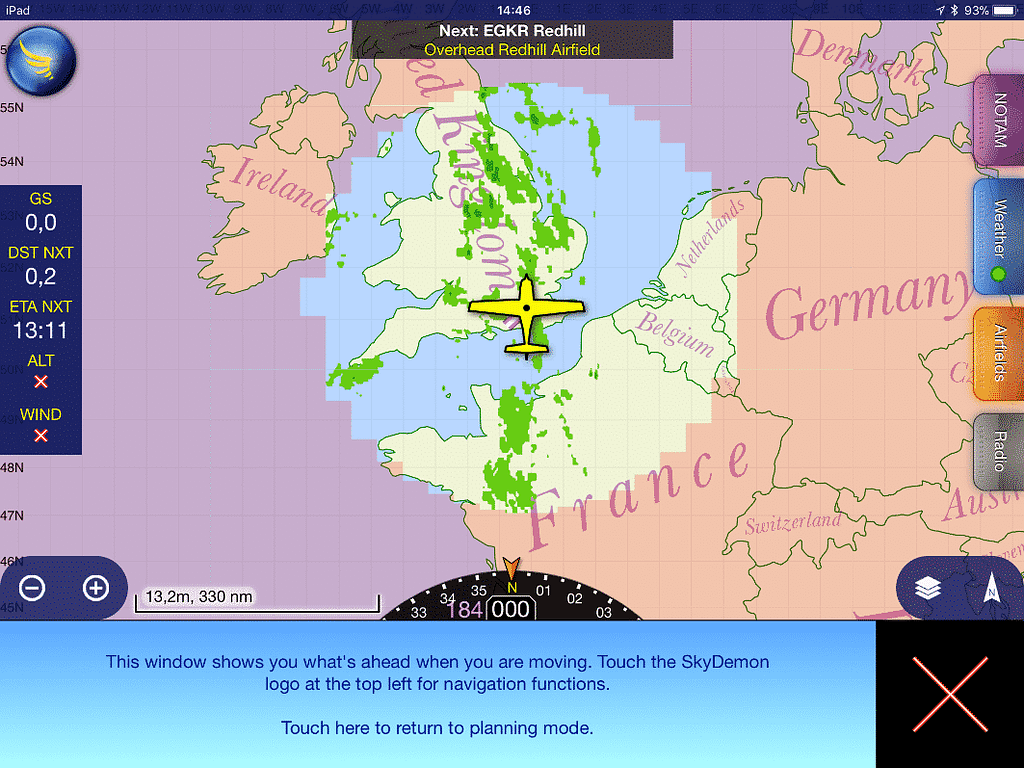 3. What equipment do I need to receive the broadcast?

You will need a UAT receiver, and a means to display the data.  These are two different components.

From a receiver perspective, you need any UAT receiver.  It does not have to be uAvionix equipment as the broadcasts conform to the international ADS-B standard.  We have tested with our own equipment, iLevil, Stratux, Appareo Stratus, and Garmin equipment.  PIREPs are coming in and we need to hear from you on what equipment you are using.

From a display perspective, this can range from installed displays such as the Garmin GTN750 multifunction display, to Electronic Flight Bag (EFB) apps on your mobile device like SkyDemon, EasyVFR, ForeFlight, or Garmin Pilot.

You do need to ensure that your receiver and display are compatible with one another.  Not all of them are cross-compatible.  The most common interface between the devices is called GDL90, and is supported by SkyDemon, EasyVFR, and ForeFlight, among others.  ForeFlight also has some proprietary solutions – The Appareo Stratus and ForeFlight Scout will only work with ForeFlight.

SkyDemon requires that the receiver also include its own GPS.

We of course recommend the SkyEcho and SkyDemon combo!

4. What is the expected range?

It depends (eek).  The range depends on several factors including transmit power, line of sight (LOS), and receiver sensitivity.    Our FIS-B stations transmit at 25W from an omnidirectional antenna.  Theoretical calculations would say that signal should be receivable at 40+NM.

However, LOS is the biggest factor in determining reception range.  LOS is affected by the height of the broadcast antenna, as well as surrounding terrain.  It is also very strongly affected by the location of the antenna on (or in) your aircraft, and the relation of your aircraft to the terrain.   An externally mounted antenna will provide greater range than an internal antenna simply due to the blockage that occurs from your own aircraft.  The higher your altitude, the less terrain is a factor, and range will be greater.  The farthest we’ve heard to date is a PIREP from a pilot over the North Sea at about 80NM away at FL320.

Range on the ground is not superb as the terrain is a significant factor.  The following figures show the modeled LOS at 1000AGL, 3000AGL, and 5000AGL.  Note the model provides a hard cut-off of range at 40 miles.

Line of Sight Viewshed at 1000AGL 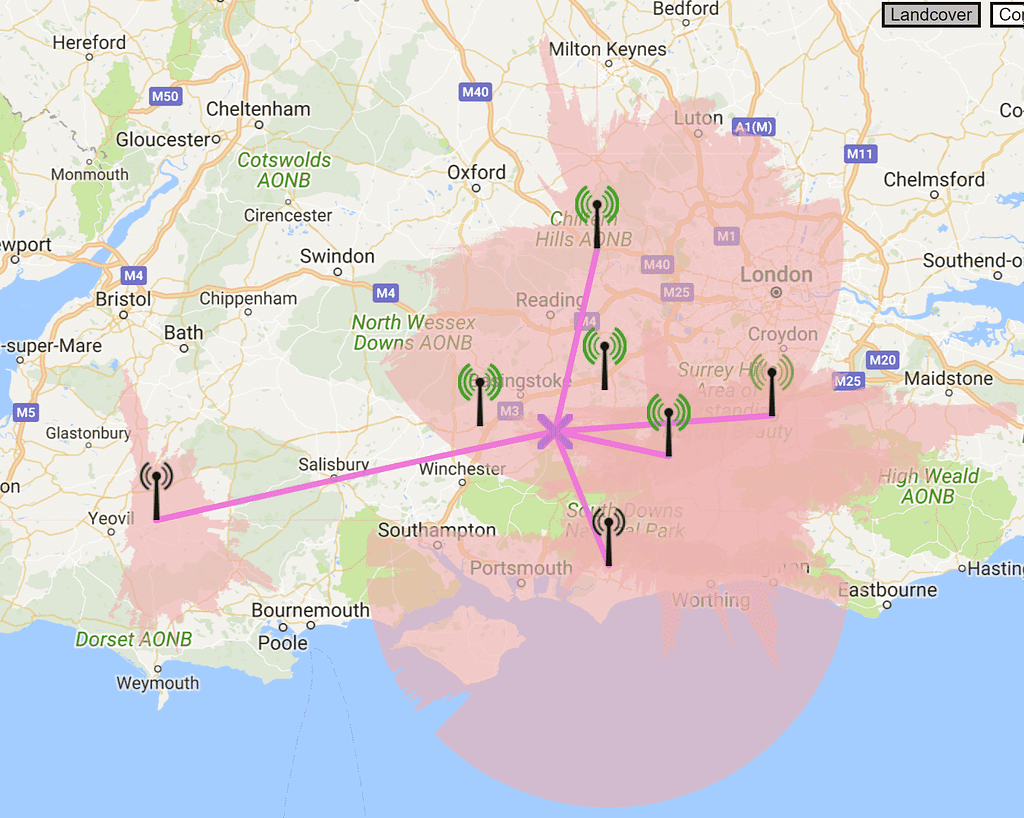 Line of Sight Viewshed at 3000AGL

Line of Sight Viewshed at 5000AGL

5. Will there be additional stations installed?

That is our intent.  In order to provide a good overall experience, we need to provide a cluster of FIS-B stations that would provide a LOS range to more than one FIS-B station at any given time in the region.  This will counteract the aircraft shadowing caused by internal antennas – providing a signal to a new station even if visibility to another is blocked by your airframe.  We have received agreement from Farnborough and Popham Aerodromes to host new sites, and we have submitted applications to OFCOM for those locations.

6. Can my airport/house/school/farm host a site?

We are excited to have received multiple offers from airports, organizations, and individuals who have an interest in hosting locations.  Most likely, after adding the additional sites mentioned above, the trial will run its course until the next phase of deployment, whatever that may be.

7. How long with the trial last?

Our non-operational transmit licenses are good for 6 months, and are renewable for an additional 6 months.  We hope that at some point during that period, we can generate enough user feedback and demand from the community to convince the CAA to allow us to provide this service on a non-trial basis.

8. Who is funding the trial?

There is no outside funding being provided for this trial.

9. Can you broadcast traffic?

We are not broadcasting traffic currently, but we have had some preliminary discussions with CAA regarding this possibility.

10. How can I provide feedback?

This is critically important.  Without feedback, we cannot collect the data we need to a) improve the service, and 2) help to convince the CAA to make such a service viable beyond a trial.  We have set up an online feedback form for users to provide feedback – positive and negative.  We need data, numbers, actual flights, equipment used.  Please do so.  Spread this link.