For decades commercial aviation has relied on highly regulated technology to enhance safety. Airlines and Business Aviation largely rely on certified avionics and Air Traffic Controllers (ATC) have long relied on certified IT systems layered on certified surveillance systems to safely separate traffic. These technologies are in continuous development, albeit subject to the most rigorous testing and safety standards, often guided by international standard-setting bodies.

In recent years, General Aviation (GA) pilots have seen an accelerated introduction of innovative technology to help them fly more safely. Whether it be for pre-flight planning or in-flight navigation and traffic detection, software usually running on tablets can be found in most GA pilot’s flight bag.

Meanwhile, in the typical ATC tower at most small airfields in the UK and around the world, a time-traveler from the 1950s would feel right at home. For these airfields little has changed – radar is out of the question due to the significant costs of both the surveillance system itself and the tools required to visualize the data, so it’s eyeballs looking out the window, hand-written flight strips, and VHF radio. That advanced technology wave has, by and large, passed them by. Until now…….

17th December 2021 marked the day that the UK regulator (UK CAA) granted Flight Information Service Officers (FISOs) permission to use a Cooperative Surveillance Flight Information Display or FID. Rather than relying solely on pilot position reports and what FISOs could see out the window, the CAA has now allowed FISOs to supplement their situational awareness with traffic information displayed on an FID screen, much akin to the pilot using an EFB with a receiver.

Prior to this date, FISOs in the UK were not permitted to use technology of this nature for what the CAA regard as ‘Safety-Related Functions’, such as passing traffic information to pilots over the radio.

So, what changed the UK CAA’s mind?

Back in 2017/18, the CAA, in conjunction with their Electronic Conspicuity Working Group (ECWG), was looking to find ways to encourage GA pilots to adopt Electronic Conspicuity (EC) systems to improve detection of GA aircraft and help reduce the risk of mid-air collisions. The CAA announced that 1090Mhz ADS-B was their preferred EC system but there was no mandate for light GA aircraft to install ADS-B. Eventually, the ECWG spawned what is now CAP 1391, a radical regulation at the time that authorized low-power portable ADS-B transceivers. uAvionix quickly responded to this by introducing SkyEcho, a low-cost / low-power portable ADS-B In/Out transceiver which revolutionized the air-to-air visibility of general aviation in the UK. The unit quickly became the predominant CAP1391 device of choice by pilots in UK and Australia, where equivalent regulations were introduced. Interest in low-power portable ADS-B transceivers is now gaining ground elsewhere in the world as well.

UK studies had shown that the highest risk of GA mid-air collision is in the vicinity of airfields and the airfield circuit or traffic pattern. The introduction of CAP1391 immediately gained a significant adoption rate, which helped propel its popularity further as pilots were now able to see other (suitably equipped) traffic on their EFB

A proposal was made to ECWG arguing that enabling FISOs at GA airfields providing Aerodrome Flight Information Services (AFIS) to use these ADS-B position broadcasts would advance the Working Group’s aims of improving safety and provide further incentive for pilots to adopt ADS-B. Giving FISOs a traffic display showing an accurate presentation of the position of aircraft with ADS-B Out would enhance the FISO’s situational awareness. Permitting FISOs to pass traffic information to pilots based on this ADS-B data would improve the service FISOs provided to pilots.

The traffic display could help FISOs provide better information to pilots to assist them in avoiding airspace infringements and flight into terrain. Together, all of these would make GA safer. The challenge was to prove it, especially addressing concerns around the fact that the FISO would only see a partial traffic picture as aircraft without ADS-B Out would not show.

A trial for what was called at the time a ‘GA Airfield ATS ADS-B Traffic Display’ was developed and supported by the ECWG and CAA. The trial traffic display system was built on a uAvionix pingStation ADS-B ground receiver combined with Virtual Radar Server (VRS) software. 50 uAvionix SkyEcho portable ADS-B transceivers were employed as loaner devices to supplement the aircraft base already equipped with ADS-B Out. After substantial discussions with CAA ATS Inspectors, a formal trial safety case and safety plan were agreed upon.

Three airfield ATS units (City Airport (Manchester Barton), Chichester (Goodwood) Aerodrome & North Weald Airfield) were recruited as participants in the trial, who helped recruit owners of non-ADS-B equipped based aircraft to use the loan SkyEchos. The pingStations and VRS systems were set up and, after further individual airfield safety cases, system checks, operational procedures, and staff training were approved by the CAA, the trial ran for six months concluding at the end of August 2019. The ATS units provided daily online feedback throughout the trial, including documenting enlightening situations they had encountered.

The final trial report analyzed all the feedback and presented the evidence to the CAA. The feedback was extremely positive and FISOs fully endorsed the system.

“Having been a FISO for some 20 years it has been nothing but apositive. It enables me to provide a much better service as a FISOgiving me a tool to enhance my own situational awareness. …… Ican now confidently know where aircraft are and identify relevanttraffic information and assist pilots in avoiding conflict”

Fast forward two years to December 2021 and, accepting most of the recommendations from the trial report, the UK CAA has now defined regulations supporting ADS-B Traffic Displays, as what they now call a Flight Information Display or FID, publishing updates to the following documents:

In the absence of a ‘conventional’ ATS surveillance system [radar] and when approved by the CAA, the FID may be used to support the provision of AFIS in performing the following functions:

a) flight path monitoring of aircraft on final approach;

b) flight path monitoring of other aircraft in the vicinity of the aerodrome;

What is more, the CAA has made several mentions of the FID in their latest Draft Airspace Modernisation Strategy 2022–2040 Part 1: Strategic objectives and enablers (CAP 2298a).

So much for approvals. Now comes the task of bringing this technology to bear in the real world.

We have not rested on our laurels. Since the original trials, uAvionix has upgraded the ADS-B ground receivers to the pingStation3.

As well as being more robust, including an IP67 weatherproof housing, pingStation 3 provides simultaneous dual-band support for 978Mhz UAT and 1090Mhz. It follows DO-260B standard, utilizing an internal GPS to provide position plus precise message timestamping to support multilateration purposes.

Besides commonly used JSON output formats, commonly seen in commercial off-the-shelf systems, pingStation 3 offers support for the ASTERIX / CAT021 protocol, widely used in the ATM world as the output for ATS surveillance systems. With pingStation3, the sensor capability that was previously cost-prohibitive to smaller airports instantly changed the game. 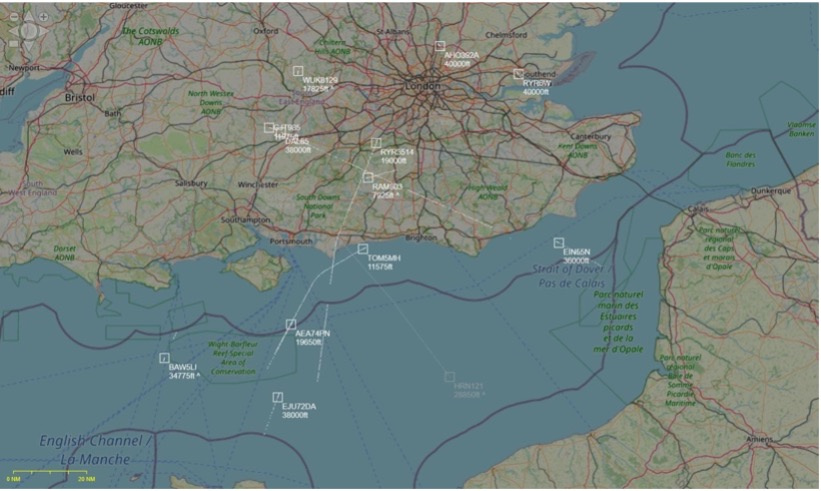 The VRS software used in the trial was chosen because it was readily available and free! Although it does have a few suboptimal features and limitations for this particular application (for which it was not designed), there was no real alternative at that time as all approved systems were also cost-prohibitive. As FISO use of FIDs was not permitted then, there was no market for commercial software optimized for this application. One aim of the trial was, having gained regulatory approval, to encourage a market for software developed precisely for this FISO FID requirement. uAvionix is working with several partners such as 42Solutions, Plane Finder, and Cambridge Pixel to meet exactly this need. Watch this space!

There are further exciting developments coming too. The UK CAA has promised equivalent new approvals for use of FIDs in ATC. Airport Ground Movement Surveillance Radar or MLAT is far too expensive for most ATC units at the airport, so there is a keen interest in using alternatives. Using pingStation 3 as an alternative to ground radar is another application well suited to FIDs, both technically and economically, especially when ground vehicles are equipped with low cost / low power ADS-B devices on 1090MHz or 978MHz with very similar functionality to CAP1391 devices for aircraft. The safety benefits of integrating the airborne platform, airside ground vehicles, and the FISO on technology that communicates with each other are endless, especially when integrating other data into the receivers, such as FLARM, a technology predominantly used by gliders.

The leadership taken by the UK on expanding the safety case for ADS-B in a whole new direction could have positive implications around the world, especially in the ongoing discussion around the integration of all airspace users, including UAS…

In the meantime, let’s open the blinds for every FISO in the UK and quickly expand the safety benefits of situational awareness across all UK airfields.