Anticipating the 2020 deadline by which all manned and unmanned aircraft must have collision-avoidance capabilities, Paul Beard is confident that his company’s Ping series of such devices will garner a significant niche in the marketplace. The Palo Alto, California-based company uAvionix Corp. now manufactures what it says is the world’s smallest ADS-B (automatic dependent surveillance-broadcasting) transponder, with a half-watt power output, a four-mile range and a weight of five grams. The company also offers a mid-level transponder, the Ping 2020, which has a range of 40 miles and weighs 20 grams.  Making its debut at Xponential 2016 is the largest such transponder, the 75-gram Ping 200-S, with a 400-mile range.

“They neutralize the traditional problems of integrating drones into the national airspace,” Beard says.  “We’re looking to get increased awareness of ADS-B as a strategy for safety for drones and airplanes.”  The company also hopes to form relationships and partnerships with UAS manufacturers as well, Beard says. UAvionix’s drive to create and market crash-avoidance devices began a year and a half ago, with the introduction of the smallest of the three units. “There was no commercial silicon available, because the large-scale commercial silicon companies don’t invest in the aviation business. The volumes are [too] low. We had to start from scratch and develop our own low-cost components,” Beard says. 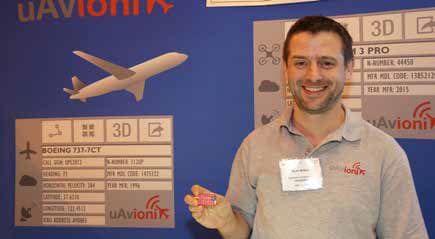 Today, uAvionix provides transponders to Internet-balloon and package-delivery companies, as well as hobbyists.  “The team of seven engineers at uAvonix has a track record of repurposing disruptive technology into established businesses,” Beard says.  “We’re looking for new ways of doing things — radio architecture, [using] the capability of modern silicon — to do things that haven’t been done before.”