A Radio Isn’t a Radio

To many, radio frequency (RF) concepts are black-box magic. We live in a world where “wireless” technologies are taken for granted – mobile phones, Wi-Fi, Bluetooth – we can even pay for stuff by waving our credit card over a magic symbol at the check-out counter.  It just works, and we don’t even think about it.

This pervasive convenience has perhaps led to dangerous assumptions when thinking about certain applications like UAS Command and Control (C2), which is today’s topic.  A radio is a radio, right?  We might think about how powerful it is because common sense tells us that power translates to range – but we don’t think about the physics-y aspects that can really matter – like what frequency it operates on and what effect that frequency has on range and protections against interference. What is polarization? Should my antenna point up, down, or out? Do we need redundancy?  If so, is it smart to just put two of the same things on board, or should I use two different radios?  Why is one radio $50 and another $500? Is it encrypted?  What is frequency hopping, CDMA, TDMA, QPSK, or ABCD? Is it EVEN LEGAL? We’ve seen many operators make the mistake of overlooking critical factors in making their selections – because a radio is a radio – and it just works……until it doesn’t.

The Air Accidents Investigation Branch (AAIB) of the UK government recently published a bulletin of a nightmare fly-away scenario.  In this instance, a 95 kg drone experienced a fly-away event – climbing to 8000 ft, entering controlled airspace at a holding point for flights arriving at Gatwick Airport, where it stayed until the battery depleted – it plummeted to the ground 40 m from occupied houses.  Thankfully there were no injuries.

What went wrong?  Many things, as the bulletin points out, but we’ll focus on the C2 link. Upon examination, the AAIB report states the circuit boards “were populated with ‘hobbyist’ components with exposed wiring, large amounts of solder and lumps of adhesive.”  There was a secondary kill-switch radio – which also failed.  “The kill switch used electronics prototyping board with a number of jumper wires instead of a printed circuit.  Failure of any of these wires would render the kill switch inoperative.”  The radio transmitter could be configured to operate on different frequencies and at different power levels.  Due to pre-flight errors, the power output switch was set to the lowest setting (10mW) when the operators thought it was operating at a higher output, and they had selected a frequency that was not approved by Ofcom (the UK’s frequency management organization) for airborne applications.  An article in The Register on the report states:

For emphasis, the AAIB report also adds “Unauthorized use of radio equipment is illegal in the UK and can lead to fines, a prison sentence, forfeiture of the equipment used in the offense and/or a criminal record.”  This is no joke, and clearly a radio isn’t always a radio. 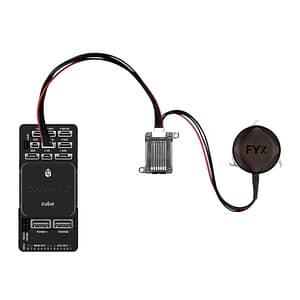 The report is worth a detailed read, but not the full point of this article. Last year, uAvionix introduced our first C2 radio. The microLink Airborne Radio System (ARS – in “RTCA-speak”) and skyStation Ground Radio System (GRS) operate on Industrial, Scientific, and Medical (ISM) frequencies approved for use in the U.S. and Canada.  While ISM frequencies are used today by 99% of UAS operations globally, the FAA and FCC have been telegraphing future policy which will limit these frequencies to low-risk operations.  Why?  For fear of interference.  In short, ISM frequencies are the “low bar” when it comes to using spectrum, and one of the key rules of the game is that you simply have to accept that interference exists and deal with it.  When your Bluetooth headphones disconnect, nobody gets hurt – that’s what ISM frequencies are for. (On a side note, this is the same reason we objected to the use of ISM frequencies for remote identification.)

The microLink system “deals with it” as best as any ISM radio possibly could, using frequency hopping algorithms to minimize interference on any given frequency, and employing redundant radios and two antennas oriented in different planes to minimize blockage from your own aircraft.  We over-engineered the microLink System using our aviation avionics heritage, employing sound design assurance practices, and mapping it to the only relevant standard that existed in the industry at the time – ASTM F3002-14A.

A recent flight conducted by uAvionix, powered by MicroLink and SkyStation.

The foundational element of a TSO is an industry-standard.  In this case, RTCA recently published DO-362A, “Command and Control (C2) Data Link Minimum Operational Performance Standards (MOPS).”  DO-362A uses a slice of aviation protected spectrum in the 5 GHz “C-Band”. The next step will be a revision to the current TSO-C213 to TSO-C213a, and that gets the ball rolling.  Achieving a TSO is a monumental engineering effort – and through a lot of sweat and sleepless nights – we’ve become proficient at it.

When we introduced, microLink, we also introduced an L-Band radio we called SkyLink.  While we personally believe L-Band is a better fit due to all of the physics-y characteristics of the frequency band – those characteristics also make it attractive for a lot of other aviation uses, and the space is quite crowded.  For that reason – it looks like L-Band is going to take a bit longer to develop as a viable source of C2 frequencies.  So, we’re moving forward with our development of SkyLink C-Band now that there is a clear path to achieving certification.

SkyLink C-Band borrows from the core architecture developed for our military IFF programs, resulting in an extremely robust, high-performance platform second to none.  SkyLink C-Band is expected to achieve ranges exceeding 40 NM for aircraft above 1000’AGL, thanks to our new sectorized, steerable beam-forming GRS architecture.  (I’m channeling Tim “the Tool Man” Taylor now with several caveman grunts!)  This is the stuff we get up early for.

The SkyLink infrastructure will be tied together with the underlying SkyLine enterprise C2 managed service architecture which we’re currently deploying as a core component of the Vantis network in North Dakota.  Stay tuned for more content on that.

No, a radio is not a radio.  If your application takes you above 1000’ AGL, into controlled airspace, or delivering cargo or passengers, you’re going to need SkyLink to close on your Type Certifications and Safety Cases.  You’ll hear more about SkyLink C-Band as we progress through testing.  In the meantime, don’t end up in the next AAIB report.  Make smart decisions, fly safe, and think about your radios!