A Palo Alto, California, company has released the first in a series of lightweight Automatic Dependent Surveillance-Broadcast solutions for drones. The pingRX, at $175, is the first of these, enabling ADS-B In for drone pilots.

The “detect” in “detect and avoid” is quite a challenge when it comes to drones, since even unmanned aircraft models designed for professional use can be as small as a dinner plate.

Small enough to mount on even the most modest quadcopter, the devices are among the first tangible products to emerge from a sprawling collaboration of government agencies, academia, and private companies—all focused on the safe integration of unmanned aircraft into the National Airspace System. Weights for the $175 pingRX ADS-B In receiver with built-in antenna start at just 1.5 grams.

Like much of the technology being developed to keep manned and unmanned aircraft separated, the pingRX is functional but not yet fully realized. As with manned cockpits, the drone pilot will only “see” data on aircraft that are visible to the ADS-B system, either by virtue of signal transmission or radar coverage.

Integrating the pingRX (and related products still in the pipeline) with DJI products also remains a work in progress, which is an important issue given DJI’s global dominance of the drone market. DJI, based in China, is the runaway leader in the consumer and small commercial drone markets, controlling more than 50 percent of the consumer and small commercial drone market by even the most conservative estimates, higher still in some segments. 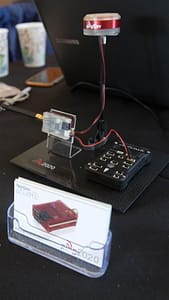 uAvionix is developing a complete ADS-B solution for drones, one that even small drones can carry. Jim Moore Photo

The uAvionix booth at the Small Unmanned Systems Business Exposition in San Francisco in late April featured the smaller-than-a-business-card pingRX, and the coming ping2020 (which broadcasts ADS-B Out data through a built-in transceiver, and at a total weight of 25 grams) and the pingNAV system that is also in development. The pingNAV, at 30 grams, will add a Wide Area Augmentation System (WAAS) GPS receiver to fully facilitate ADS-B Out. uAvionix Director of Business Development Adam Paugh noted that the company is intimately involved in the NASA Unmanned Aircraft System Traffic Management program, part of the aforementioned government-academia-industry collaboration to develop technology and systems for drone separation and safety.

“Ninety percent of the (NASA UTM) teams are using our equipment,” Paugh said. “We see the future as something where everything that flies will be tracked.”

The miniature receivers and transceivers on display were connected to Pixhawk autopilots made by 3D Robotics, though Paugh noted that the various systems can integrate easily with any drone software using the MAVLink (Micro Air Vehicle Link) protocol. This may prove important, particularly if the pessimistic speculation in recent months surrounding 3DR’s future proves well-founded. The company, which aimed to challenge DJI in 2015, has been cutting staff and closing facilities recently, though 3DR executives remain doggedly optimistic in their public statements.

Paugh said uAvionix is actively working with an array of drone makers to integrate the ADS-B technology at the factory, and within the various mobile apps used to control drones. For now, users can display traffic information from the pingRX in a separate application on the same (or another) device; the same basic device (pingUSB) can also plug into a USB port and allow a laptop or tablet running a program called Virtual Radar Server to display the inbound traffic signals on a map view.

In the drone-mounted version, the inbound (1090 and 978 MHz) signals are fed to the drone’s on-board electronics for transmission to the pilot via control telemetry, allowing drone pilots access to the same situational awareness information that manned pilots can utilize through their own avionics or mobile devices. Paugh said the company has worked hard for many months to miniaturize the transceivers and receivers, and hopes to sell many of them, both to factories and the public, including those who build their own drones.

“We kind of envision it to be on any drone that would hit the market,” Paugh said. He noted that all of the aircraft-mounted equipment keeps power consumption low enough to avoid significant reduction of flight time.

Prices for the ping2020 and pingNAV models remain to be announced.